2017 marks the 6th year of the YouFab Global Creative Awards, which has walked in parallel and simultaneously contributed to the explosion of the Japanese digital fabrication scene. From 2016, YouFab has refined Fab as “the creativity that crosses and combines both the physical and the digital.” Fab doesn’t stop at making things by using digital data, but rather has grown in scale towards an effort to discover new and innovative creations.

The following will cover a two-part report of the day’s events, including a three-part awarding of the 20 chosen pieces, a presentation from our Grand Prize winner, and a panel given by our judges.

Entries embody the spirit of “Rock It!” by rejecting conventional wisdom and deviating from traditional contexts

The venue of the YouFab Opening was held at the recently built 100 BANCH. 100 BANCH is a collaboration space constructed in collaboration with Loftwork by Panasonic, which is celebrating its 100th anniversary in 2018. 100BANCH has been created with the intention of acting as a base for development of design with the next 100 years in mind. 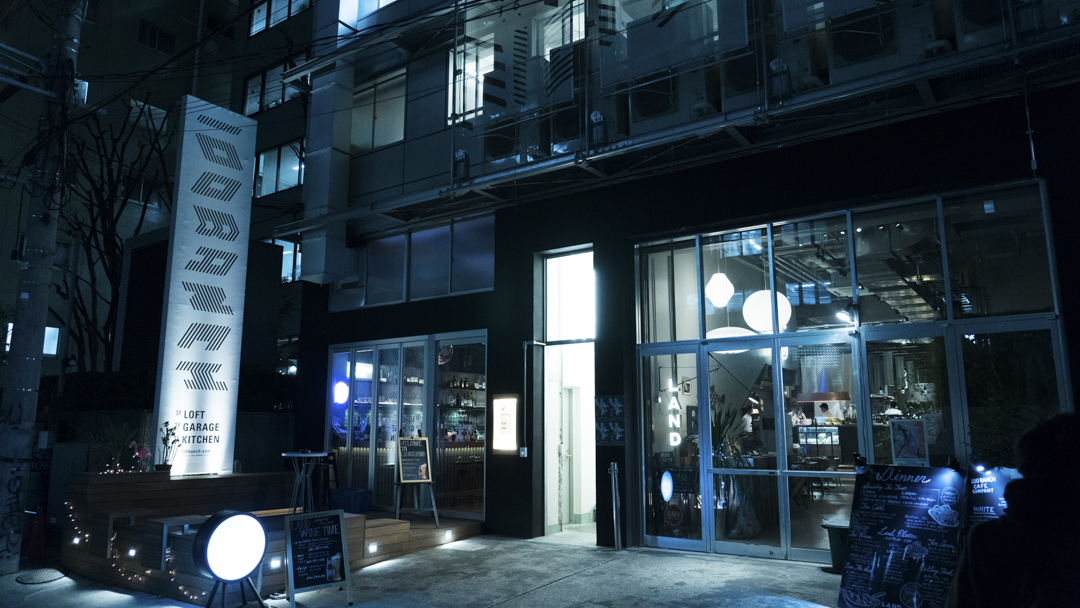 The event started with some opening remarks from YouFab’s chairman, Toshiya Fukuda. 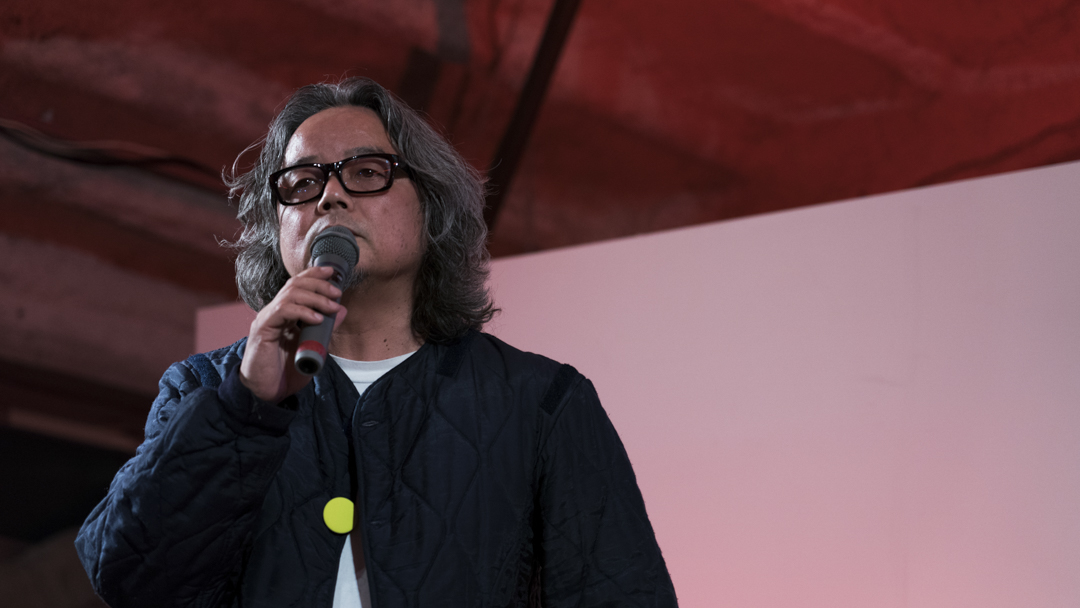 YouFab 2017’s theme is “Rock It!”. This theme embodies YouFab’s spirit of supporting work that challenges conventional wisdom, deviates from the easily known context, and steps forward resolutely towards a territory still unknown. This year also saw many selections that not only fit the theme, but contained within them a will to pioneer new possibilities with digital fabrication.

The judging was done by an international team of five experts, including Hiroya Tanaka, our Chief Judge and professor in the Faculty of Environment and Information Studies at Keio University, Julia Cassim, a professor at Kyoto Institute of Technology and Shiho Fukuhara, Artist, Bio Designer and Founder of poiesis labs

During the first part of the awards ceremony, award certificates were conferred upon the 20 works that passed the judges’ rigorous examination. These 20 winning work were chosen out of 277 applicants. 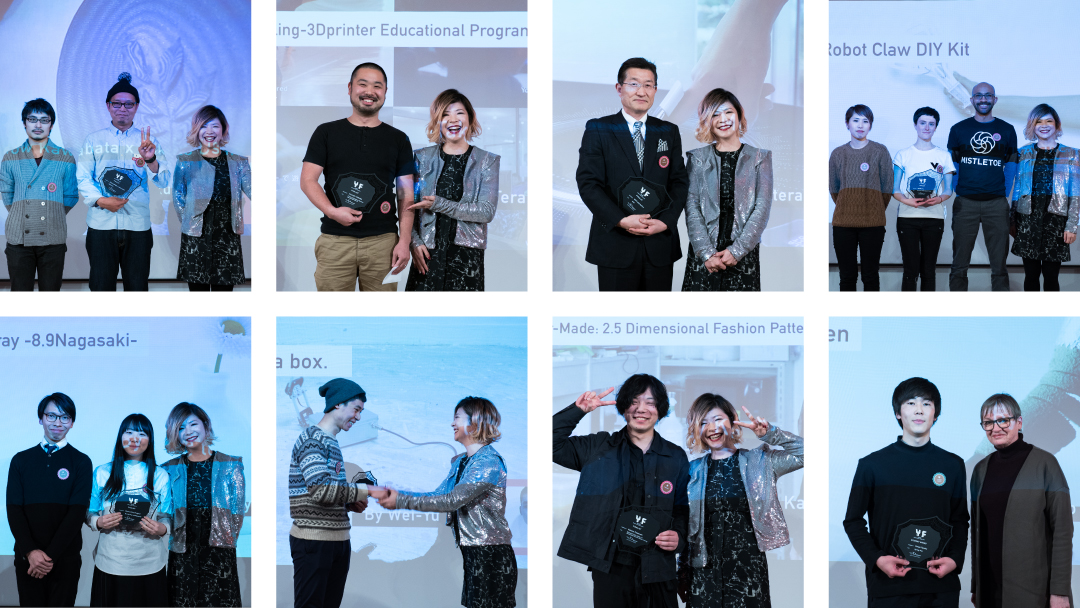 Among the winning works , it was felt that many contained an ambition born out of an awareness that posed intriguing questions to society that showcased rich creativity and scalability while using Fab technology as a base. Efforts to cross biology and architecture with Fab technology also stood out. The assembled works composed a lineup that symbolized having entered into a new phase of digital fabrication.

The first prize went to American Marc Fornes’s “Minima | Maxima.” The work was completed on commission for the World Expo 2017 in Astana, Kazakhstan. 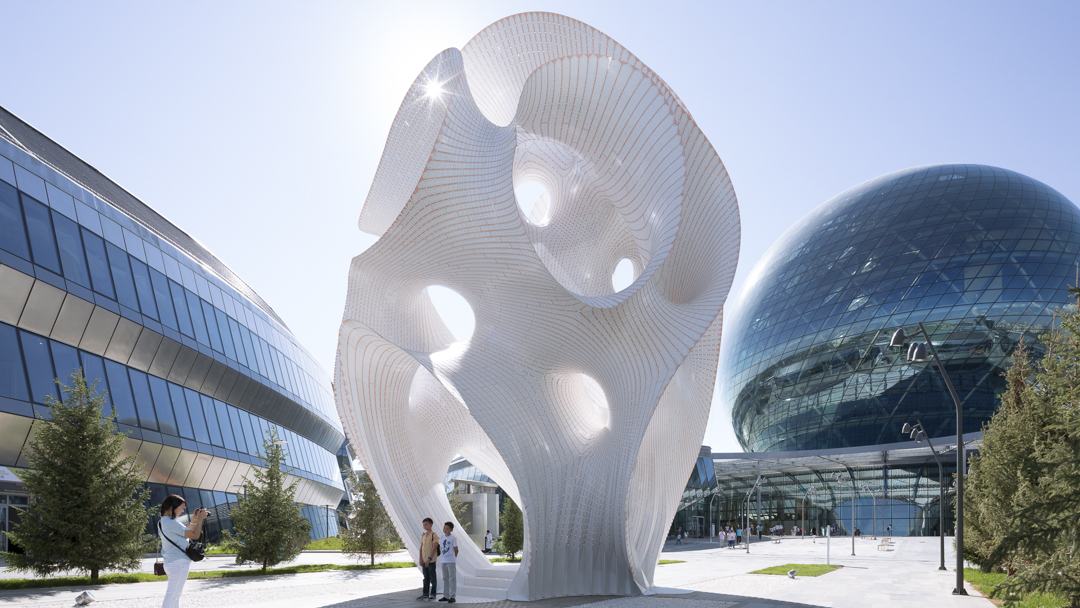 The material used in “Minima | Maxima” is aluminum and only 2mm thick. Fornes’s construction was composed of approximately 5,300 aluminum plates, cut long and narrow, combined in three layers similar to weaving a wicker basket. The curved surface, modeled finely with 3D modeling, manages to both retain its strength while also sketching numerous beautiful curves, creating a structure of curves which mutually support each other. For that reason, regardless of the fact that the structure is gigantic, reaching nearly the height of a four-story building (approximately 13m), it stands on its own, with no need for pillars or beams.

With regards to the exterior design, the structure, and innovation with its materials, the work was rated highly for its dynamic and ambitious expression of the potential of digital craftsmanship, and it was thus chosen as the First Prize winner.

Marc Fornes offered the following comment: “I’m very happy to have YouFab speak so highly of the imagination to challenge the impossible and the high-level digital fabrication in this work. I’m sending this award out to all of the other team members involved in this!”

And then, shining in the light of the honorable Grand Prize was American Amy Karle’s ”Regenerative Reliquary.” 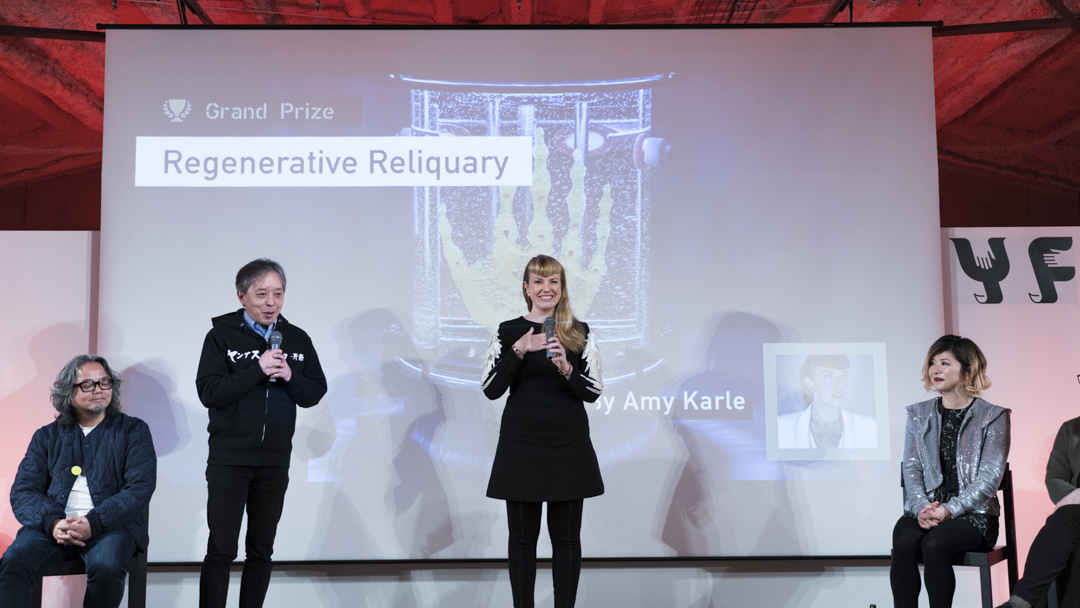 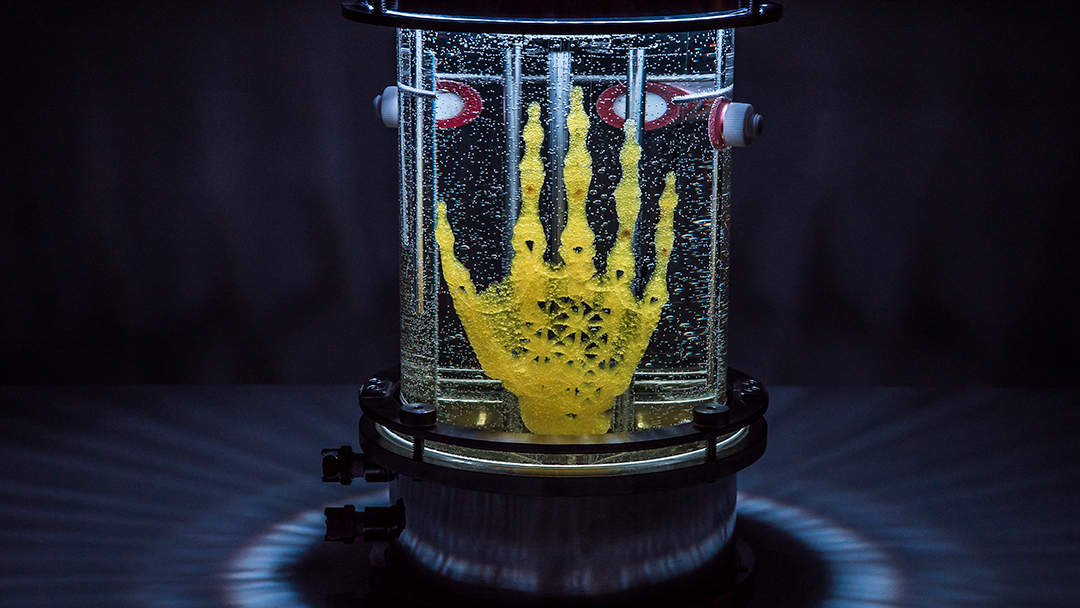 The goal of a reliquary is to preserve the dead by enshrining flesh from which life has vanished. In this way, a reliquary becomes a monument to life itself. In her work, however, Karle proceeds in the opposite direction, challenging with a philosophical theme of “bringing the potential of life forth from an inanimate object which was originally lacking life.” Through its combination of biotechnology, art, and Fab technology, Regenerative Reliquary is a monumental work that will leave a large impact on the history of YouFab.
Mr. Tanaka, the Chief Judge, gave the following comment on his reason for selecting the work for the Grand Prize: 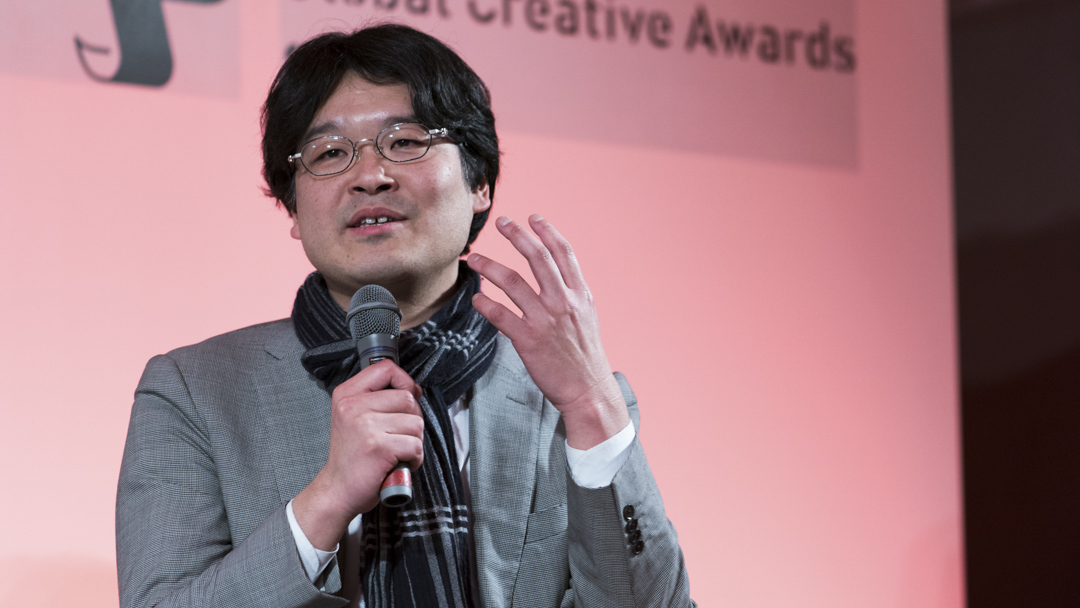 “Global and local, old and new, animate and inanimate… Fab is right now evolving towards being a technology that can tie these ‘pairs of extremes’ together. As a result, the space between these extremes, the unknown middle area, is being born. Our highest prize this year shows symbolically the fusion of organic matter and digital fabrication. I think it is a work that raises philosophical questions of the highest order to modern society.”

In the second half, the presentation given by Grand Prize winner Amy Karle and the judges’ panel will be discussed. →To part 2 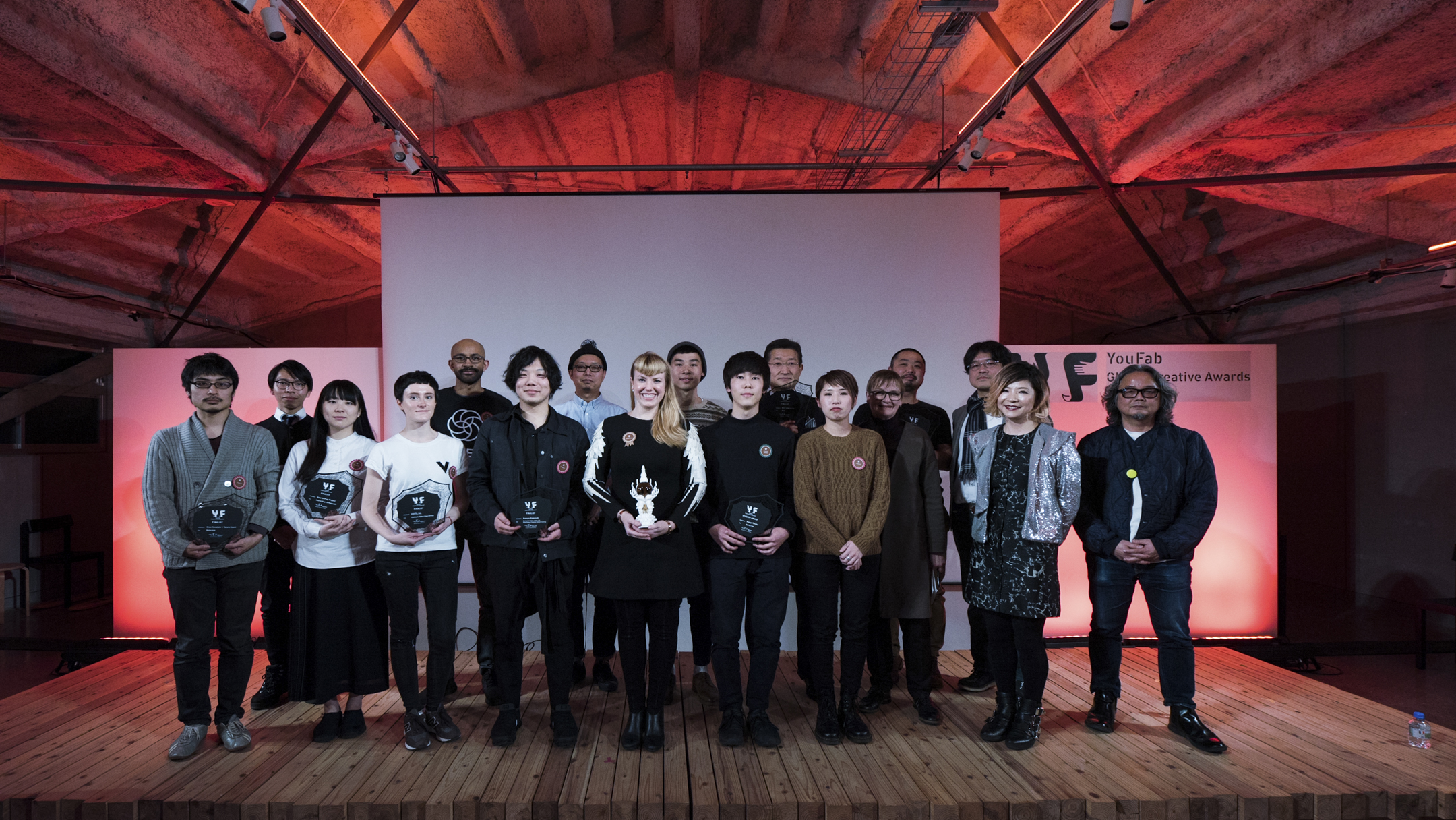 A group photograph of everyone that participated in the awards ceremony. Once more – congratulations!